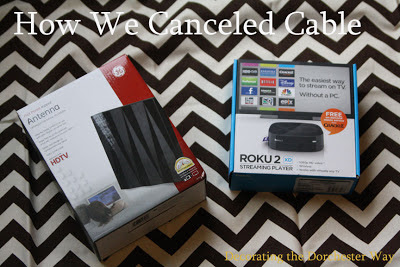 I canceled cable!!! Our last bill for phone, cable and internet was $172 a month!!! How insane is that!

Out of the three of these we use the internet the most. I personally barely watch anything beyond local channels and my husband watches cable because its there.... not really because he needs too.

I had two big concerns about canceling cable.

1. I love DVR, how would I live without that?

I was recently talking to my youngest sister about our last bill and she told me I should check out Roku.

After some research I realized Roku would help with the no DVR issue since for $8 a month you can stream anything from Hulu plus. And Hulu plus has pretty much all of the current shows available for viewing the next day! (I still have not figured out how to stream CBS shows, so if anyone knows, please let me know!)

So that brings me to the Curious George issue. Little Man has no problem watching the same episodes over and over again. Well I am also an Amazon Prime member and you can stream Amazon Prime with Roku as well. However Curious George is not one of the free shows included with that. I broke down and purchased a season of Curious George, so we now have 30 episodes to pick from (not the 89!)

So I finally made the call today and canceled cable! I wanted to cancel our phone, but was talked into keeping it for now. "Do you know 911 is much faster from a land line...." What a great thing to tell a pregnant hormonal mother who freaks out about everything!!! So for now I kept it!!! I decided after some research to stay with the cable company for internet. We have really fast internet with them and switching to someone else may have saved us a few bucks a month but the speed would have been cut in half, and I figured with all of our devices we connect to the internet and wanting to stream, keeping the faster speed was worth it! 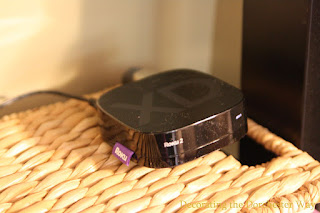 Probably not the best picture to show how little this Roku box is!! But it's like 3 inches by 3 inches! So small!!

The cost break down:

We previously paid $172 a month with cable
Currently pay $72 a month for phone and internet (and if I am ever brave enough to cancel phone this will only be $50 a month!!!)


Hulu Plus is $8 a month (but we have it free for the next 6 months)
Amazon Prime is $6.50 a month but you pay for that up front yearly (I am not sure if I will keep this after my year runs out!!)

I purchased two Roku boxes for $180 which each including 3 months free of Hulu plus  (Target had this promo last week!!!)

I also had to purchase one antenna to access local channels, as we already had two. That was about $14.
And I bought one HDMI cable to connect the second Roku box to the TV (I could have just used the cable included, but decided to upgrade to the HDMI cable)