Traveling with an infant on Amtrak

This is not craft related, but for a while now I wanted to blog about my experience taking Amtrak with an infant because before we set out on this trip I searched for others experiences and was not able to find very much information.

So if you do not care to know about traveling 56 hours on an Amtrak train with a child, feel free to stop reading! 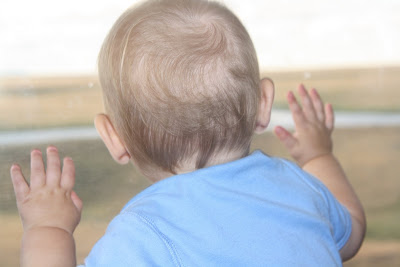 Last August we took Amtrak to Whitefish, Montana for my cousin's wedding. We actually traveled with a large group of my extended family. My husband was not able to attend, but we had lots of help with my sisters and of course grandma and grandpa!

At the time of our trip my son was 16 months old. And I would say over all it was a VERY positive experience. (Well as much of a positive experience as you can have being stuck on a train 28 hours one way!! Lets just say the 16 month old was not the reason for any issues with the trip - 56 hours is just a LONG time to be on a train!!!)

I should mention I have taken Amtrak several times with my son before (by myself!) but only on a 6 hour trip.  I could go into a whole extra tangent here - but  I will just say dealing with a transfer by yourself is a bit challenging because unlike an airplane you are carrying the baby AND your luggage (backpacks are good for luggage when you are by yourself!!) But other passengers and the Amtrak staff (usually) are very helpful with helping you out when you are by yourself with a baby.

We did NOT have a roomette for our 56 hour trip, and honestly I don't think it would have been any easier with one. It might have been more difficult with one, but I was not in one, so I can't say for sure. I just know we did not have one and it worked out very well for us.

Sleep
The biggest question I had before hand was were is a 16 month old going to sleep and how is he going to sleep and stay asleep without having a total meltdown. I thought about lots of different options including bringing his stroller and having him sleep in that, his pack and play (which is small, but would have NEVER worked!) When he was little and still in his bucket seat it was perfect, he slept anywhere! My plan before getting on the train was to bring his car seat along (which we then also used in the the rental car) and bring a bungee cord along and attach his car seat to the train seat (since train cars do not have seat buckles.) 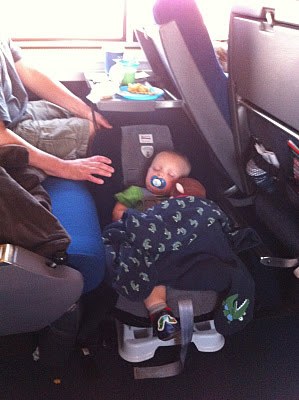 Once on the train we just put his car seat on the floor in front of our seat and made sure to put a bag or something behind the seat so it would not tip over! (It did make it impossible for 2 people to sleep in the seats but we technically had a seat for the 16 month old.) On the way there we were in the first row, which has a little more room than the rest of the seats. I was still nervous about how he would sleep, but he slept better than anyone else! Once he was in his seat (we did buckle him in his seat) he slept great the entire night! We made sure to have familiar things for him - his favorite blankets and stuffed animals (Bring a blanket for everyone in your party!! Then train gets COLD!!! Trust me!! And socks!!!! It's cold!!) When not in use, we stored the car seat away from our space to have a bit more room.

Eating
Next how to feed a young child on the train. I would suggest bringing along a lot of child friendly snacks. There is a food car, but there really is nothing a 16 month old would eat. We brought a cooler with milk for him and easy to transport snack food items - string cheese, fruit cups, yogurt, crackers, cereal... you get the point. We brought along 4 sippy cups for him as well and washed them out once we were in our hotel for the return trip. We also stopped at a grocery store before our return trip to refill our food supplies! HINT: bring along a bottle of your favorite wine or beer as well! They sell some alcohol in the snack car but its expensive and you can drink in your seat (just don't forget a wine opener!)

Entertainment
This was not as hard as we thought it would be, but we were very prepared! We brought along NEW toys which helped. My son loves cars and I would suggest bringing several of them! They are easy to play with on the tray tables. Here we are making a new friend! 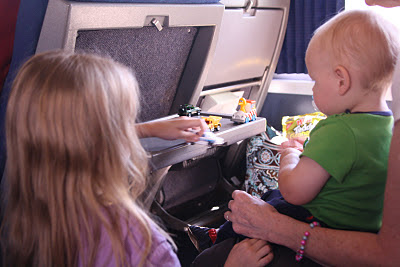 We brought new things and even a few toys that were for older children, but we knew he would be very closely supervised so that was not so much of an issue. A few new books, crayons, even a train car and a Thomas the Train flash light! (He loved that!) We also brought stickers, which were fun to put on the windows of the train! Here we are in the observation car. I highly suggest making the trip to this car often. There are larger windows and a bit more space to enjoy the views, which kept us entertained for hours! 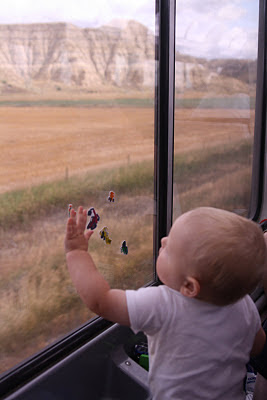 In general for our trip we over packed! (Since we were going to Montana we brought a back pack carrier to go hiking with.) Because we were part of a big group we were able to leave our luggage under the train (if you get on at a hub station you should also be able to do this) or you can leave your luggage at the front of the train for a bit easier access. Make sure to pack a "carry on" bag so it's easier to find all of your necessary items.

Misc Items
My son loves his paci so I packed EVERY single one was had just in case!

Seriously, make sure to bring socks and a blanket! Bring a sweatshirt or something for everyone as well, it does get chilly even in the summer!

Bring lots and lots of wipes! I over packed on these (and diapers!!) but I would rather have extra than run out! Plus the wipes come in handy for cleaning up after eating and so many other things!

So would I do it again? Yes, it was not that bad. It was a long time to spend on the train, but we were prepared so it made it easier. I have heard stories of the train being delayed... if that would have happened to us, I might have changed my story, but it was not so bad! Plus the views were AWESOME!!!! So that may have helped as well!

Thanks for reading and let me know if you have and questions!!