One of the baby projects I made in preparation for my daughter's birth in February was to sew some girly burp cloths! Since these were so fun to make (and SO fast!!) I have since given several out as gifts! There are so many blogs with directions on how to sew these, so I won't reinvent the wheel, but these seriously take less than ten minutes to sew! Fast sewing projects are my ABSOLUTE favorite!

These are made with fleece, so they are extra soft! I was even lazier on this project by not measuring any of my fabric, I just eyeballed it and trimmed at the end if needed. None of the pre-folded diapers were really the same size anyway, so you can't tell. (Plus they are cloths meant to wipe up baby spit up.....) 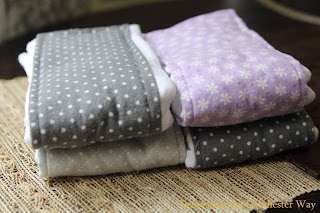 After making a few cloths, I had a lot of scrap fabric left over, so I got fancy and monogrammed a burp cloth for my daughter (and it would work for my niece too!) I simply cut out an A and traced it onto the fleece and cut it out. I then sewed my design on before attaching to the pre-folded diaper. Still very easy! And now no one will try and steal her burp cloth.... except maybe her baby cousin who also is an "A" baby! 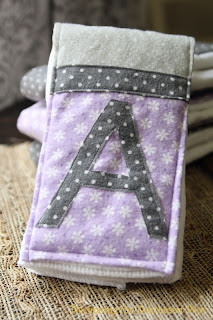