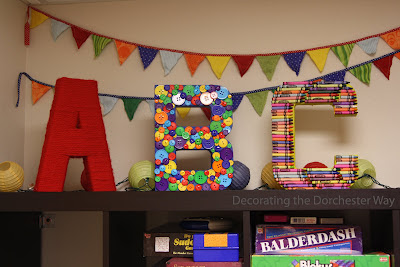 I wanted more artwork for the playroom and originally wanted to for the 3rd time re-do the cardboard ABCs I had in my son's room. (Which originally were bright red, blue and yellow for Little Man's Dr. Seuss first birthday!!!) After realizing how much work I had already put into that set, I decided to just buy a new set and keep them original set matching Little Man's room!

So I again painted a red A, blue B and yellow C. I tried and tried to think of something that started with the letter A to cover the A but I could NOT think of anything --- so if anyone has any suggestions PLEASE let me know!!!

SO I covered the A in fabulous thick red yarn, the B in buttons and the C in Crayons! I was surprised how long each letter ACTUALLY took!!!

The A was easy but it just took more time than I thought it would. After hot gluing a tiny piece to the back, I started wrapping the right side of the bottom of the A. The perpendicular parts of the A I just cut small pieces and glued several rows of yarn and covered up the rough edges with the main run of yarn. Sorry for the horrible pictures!! 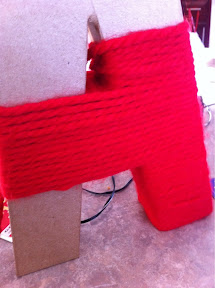 Example of what I did for the top. And then just covered up the edges later. 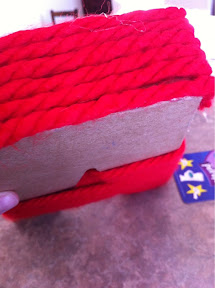 The B was probably the easiest! I just glued a ton of buttons on my B with hot glue!! (My first time using my new hot glue gun with the "low" setting and (YEAH) I did not burn my fingers this time!!!!!!! ) In some sports I added 2 layers of buttons for some extra details! Super easy! 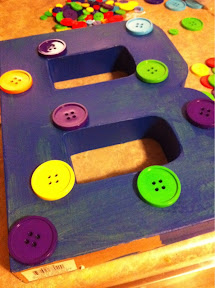 The C was easy enough but cutting the crayons was a bit challenging. I found that warming my sharp pairing knife up with hot water worked best and using the back part of the blade (closer to the handle) allowed more force to snap the crayons in half. I had a problem with ripping paper but it got easier as I went a long. I eye-balled where to cut the crayons. Once cut, I just glued them on! The easy part!!! 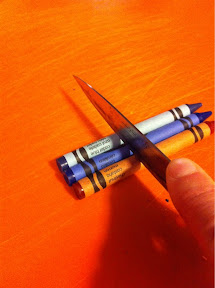 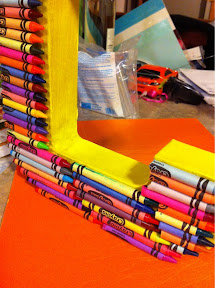 I am happy with how each turned out. I was hoping to put them on these painted shelves I have in the play room but they are heavier than I thought they would be so they need to be on a flat surface (that my cheap shelves do NOT provide!) 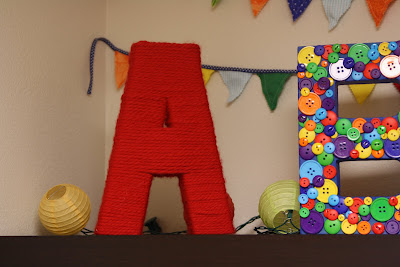 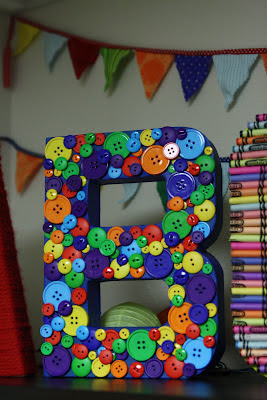 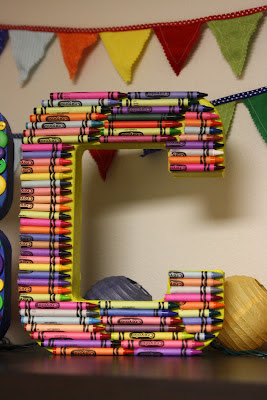 I made the bunting in the background! I will post that later. I am sort of obsessed with bunting lately!!! 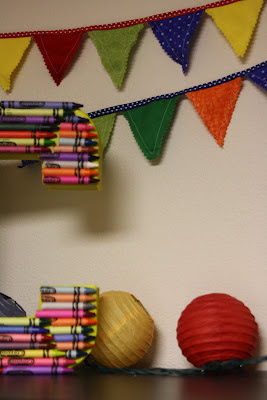 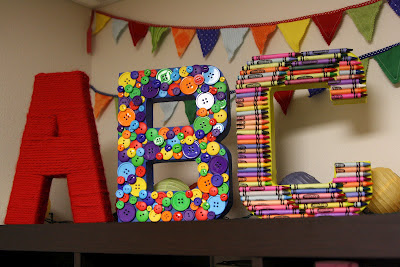 Little man is going to love them!! He is very into the alphabet right now!!!
Posted by A;ge at 5:17 PM